BANDITADELIC VIDEOGAME BOOGALOO!
100.000 copies of Beat Sneak Bandit has now been sold in the App Store!

Once again, we’d like to thank and hug everyone that bought the game! You have our eternal gratitude!

Some of you have enjoyed our hints and riddles about Year Walk, but we also feel that some of you might have been annoyed by the lack of hard facts and info. So we’d like to explain a little about the reasoning for the kind of communication we have done for Year Walk. 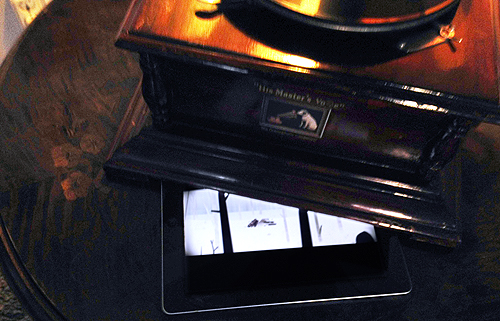 Going in with a fresh mind
We personally feel that a lot of the reporting on games is very spoilerish, and we’ve had a lot of gaming experiences lessened by that fact. Of course we realise that we cannot decide whether you decide to watch preview videos or not (and that decision should totally be up to you!), but we believe that the element of surprise and discovery in Year Walk is one of its biggest appeals, and we do not want to take that away from you.

It’s quite simple: We miss the days when we played games without knowing every little detail about them before starting to play. It’s very hard to avoid that in this time of constant news through the wonders of internet! The sense of discovery is something that is hard to find now in games (unless you live in a cave) – We are still trying to figure out how to talk about Year Walk with you without ruining that feeling. Perhaps we announced just a little too soon, but we felt that a lot of you wanted to know what we had in the works.

So, avoiding to spoil surprises is one of the reasons why we are keeping it so close to ourselves, even tough we are getting closer to release. And speaking of release: Our aim is to have the game out in late February. With that said, we do not want to promise things we cannot keep, so remember that have no controls over how long Apple’s approval take, and we will get back to you with a definite date once the game has been submitted and approved!

Riddles & Hints
The hints we’ve been hiding in various ways here on the blogs and in videos have been a way for us to communicate the feel of the game, without presenting boring spoilerish facts. It’s also been meant as a fun game for the most devoted, and we think some people have had real fun in piecing together all the pieces.
We’ve linked to the Toucharcade thread about the subject a number of times, but here we go again: Year Walk Riddle Decoders Club – Deciphering Simogo’s Next Game. It’s a fun read even if you haven’t been part of the game!

“Show us gameplay!”
We’ve been getting a few comments that we haven’t showed much gameplay in the few videos we’ve released. Actually, we have: A lot of the clips are direct grabs from the game. Every pic we released is (of course), a grabbed screenshot from the game.
And speaking of gameplay; Year Walk is not a systems-based game, like Bumpy Road or Beat Sneak Bandit. There’s not a single mechanic (for example, tapping to the beat or raising and lowering the ground) that the game is based around. For example; in a game like Beat Sneak Bandit, it’s very easy for us to communicate stuff like “loads of leves!” and “Avoid getting caught by tapping to the beat!” (even through clips) – That’s not the case here! Either way – After finishing the game we think you’ll have some fun if you watch the videos again.

Hopefully this makes things a little clearer on why we’ve been so hush-hush about everything in regards to Year Walk. To make things even clearer, let’s conclude with some facts and tidbits, shall we?

– The game takes place in one small and seamless world. As you move around, discover things and solve puzzles the events unfold that progresses the story.

– One of our goals was to make movement in Year Walk enjoyable, fast, and smooth. In a lot of adventure games you spend a whole lot of time watching a character walk or talk with no real interaction, but we think the more you can interact with a game, the more engaging it feels. We solved this making the game viewed from a weird two dimensional first person perspective. You simply grab the world and swipe away. It feels really good!

– There is no “typical puzzle” or “puzzle type” in Year Walk. One of the things we have set out to do is to make every event in the game unique.

– From our tests, it takes a first-time player about 2 to 4 hours to complete the game (Our guess is that it might take some of you even longer!).

– Have you ever been lost in the forest, and you realise that you are walking in circles? That is a scary and confusing feeling. We have tried to capture that feeling in this game.

– We believe that very few will find every little secret. Those of you who will are in for a big treat.

– We have one more, very concrete, thing to announce before release. Hold tight! 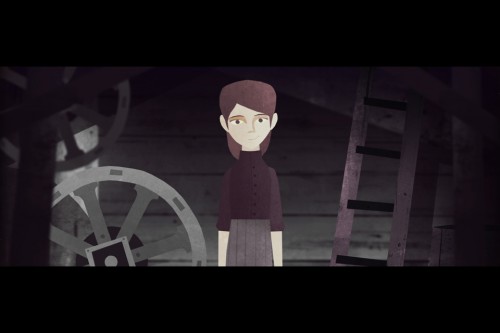 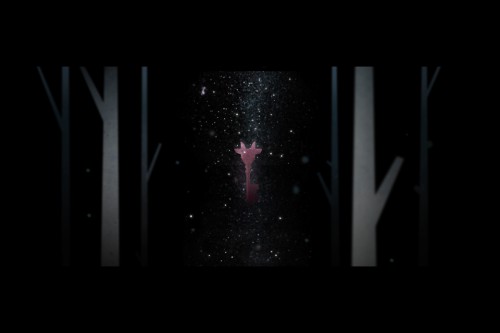 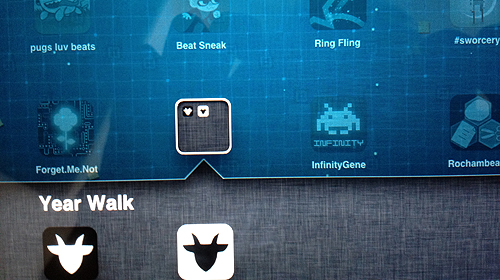 That’s right!
Year Walk is nominated for Excellence In Visual Art in the Independent Games Festival 2013!

It is a new year and we are back in the office.
Time to look ahead of what is happening in 2013!

• We are more or less finished with the game Year Walk. There’s still some small stuff to do; Minor changes after play tests, bug fixing, polishing, optimizing, proof-reading – that kind of stuff!

• But just because the game is finished doesn’t mean the project is finished. There is still one part of the Year Walk puzzle missing, and we hope to finish this part up very soon. We won’t talk about it before we can show it to you, so please stay tuned! Anyway, we are definitely in the final stretch of the project. It’s going to be so nice to wrap it up, it’s the most ambitious thing we’ve made!

• Looking beyond Year Walk, there’s hopefully other exciting stuff happening. We have a prototype of the game that might end up as GAME5, but it all depends on how a few things pan out.

Let’s get to it then!