Early on in the Year Walk project we realized that if we wanted everything to feel right, we needed to do some proper research – about the way people lived in the late 19th century in south of Sweden, but mainly about all the folk lore, myths and creatures. Luckily enough, our story writer Jonas Tarestad introduced us to Theodor Almsten whose great research made all of this possible. 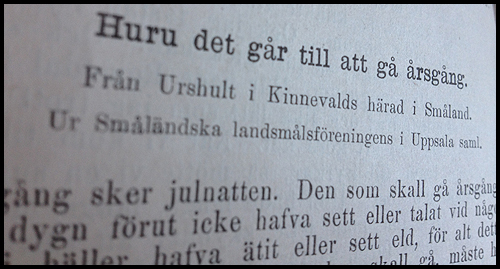 One of the few sources of information left, the booklet EN JULGÅNG/Sanderyd/HUR DET GICK TILL ATT GÅ ÅRSGÅNG/Urshult/FOLKLEKAR/Valö, Resl./

My name is Theodor Almsten and I am an associate professor in anthropology. I have spent the last eight years researching folklore. I am honored that Simogo has chosen to use my expertise concerning Swedish folklore in general and the phenomena of year walk in particular. Perhaps in the future there will be more collaboration between the academic field and the game industry.

My work on the game has been limited but very interesting. Jonas Tarestad, who is an old pupil of mine, approached me when he had a list of questions for his film script…and it was a long list! You would think he never took my class at all. In the end it was deemed for the best that I should act as an expert so that no detail, no matter how small or insignificant, would be forgotten or incorrect. That is also a demand from my side since I do want people to be educated as well as entertained.

I hope you all will enjoy the game and that it will raise interest to the fascinating world of folk lore.

One thought on “Collaborators Part 02: Research”