First of all, Kosmo Spin is featured on the FWA as Mobile Of The Day: 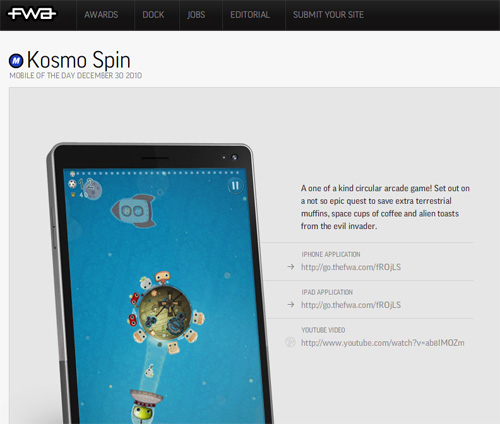 Or here if you’re surfing on of them mobile thingamajigs.

Simogo is proud and honoured.

FWA stands for Favourite Website Awards, an industry recognised internet award program and inspirational portal, established in May 2000.
FWA is the most visited website award program in the history of the internet, with over 100 million site visits as of August 2010 (and multiple billion hits to our servers).

And here’s another review, this time from App Spy:

But here’s the big news:
Kosmo Spin has now been downloaded over 20 000 times (well actually over 22 000 times but 20 000 sounds better and Gordon said that he would punch me on the nose if I wrote 22 000. He has this weird thing with numbers. Don’t ask).
To all of you that bought our game: THANKS THANKS THANKS! You’re the best!

2011 will bring a lot of nice things, both for Kosmo Spin (the first update will probably hit App Store any day now!) and the game in production (which we are hoping to reveal to you soon!).
HAPPY NEW YEAR!