We’re ready to start talking about who we are making Year Walk with, and of course we want you to get to know them. So in this three part blog post series we will let them introduce themselves.

As we have hinted at, the story and this whole project came to be in a quite unusual way. This game started with a strange little movie script. So we thought it would be fitting to start off these posts with an introduction by the man who it all started with. Ladies and Gentlehorses: Meet Jonas Tarestad – the man behind the story of Year Walk! 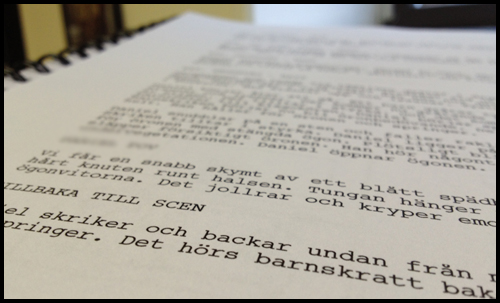 the script that started it all

Greetings Simogians!
I come in peace. I am one of the mysterious collaborators: A scriptwriter named Jonas Tarestad. And this is my story:
Back in December 2011 I felt like writing a short movie script in Swedish. I knew it had to contain snow, folklore and some darkness. When the script was done, I thought it was good but I did not really know what to do with it. Its length was awkward and it would be expensive to shoot. In January I showed it to my good friend Simon who said that it would make a good game and there we are. I am pretty sure it is the first time a handheld adventure game in English is based on an unfilmed short film script written in Swedish. Correct me if I’m wrong.

Besides having written the original script I assist Simon in adapting the story for the small screen. I am the text guy.

This is the first time I work on a videogame but I have played games since the late 80’s. Especially ones involving pirates.