DEVICE 6 is a collage of things. It’s a collage of photos, help from friends, but mostly it’s packed with references to (pop-)cultural stuff, but also from history and even our own surroundings. Some are completely intentional, some unintentional.

But before continuing, we’ll just say right now that this will contain spoilers, so quit reading now, if you don’t want anything spoiled!

We’ve talked previously about the broader inspirations, but this blog post aims to go into detail to specific things encountered in the game. A lot of the references are often to old stuff. The ambition was to create a story that would be hard to pinpoint when it actually took place. We also found it exciting to reference these type of things, as you mostly see contemporary references in games.

We’ve been meaning to make a list of these references and inspirations for a long time now, so let’s get to it. This will be full of links, so remember to check them out.

Ok, so in the order they appear in the game; a list of references, inspirations and small fun trivia things you might’ve missed!

The Title
DEVICE 6 is packed with references to The Prisoner. We just couldn’t resist to have the title itself be a homage to this legendary, amazing, show, in which Patrick McGoohan plays the role of Number 6.

The startup screen
This was inspired by basically every warning text you see when starting a electronic device, but the wording was specifically very  inspired by the Wii startup message.

Face scan
This is actually the sound of a dot matrix printer (and sounds from those types of printers are used throughout the game in the player test parts).

Opening titles.
There aren’t many specific references here, but it was generally inspired by 60s movie and TV-show intros. We liked how The Persuaders and The Prisoner managed to tell all of their backstory in the opening titles, and we wanted to replicate that.

The Doll
Jonas found this amazingly creepy doll at a flea market (we had intended it to be a jester-type puppet before finding this beauty!). While we don’t remember talking about it being a direct influence, the idea of participants getting a doll is probably unconsciously inspired by the movie The Game. 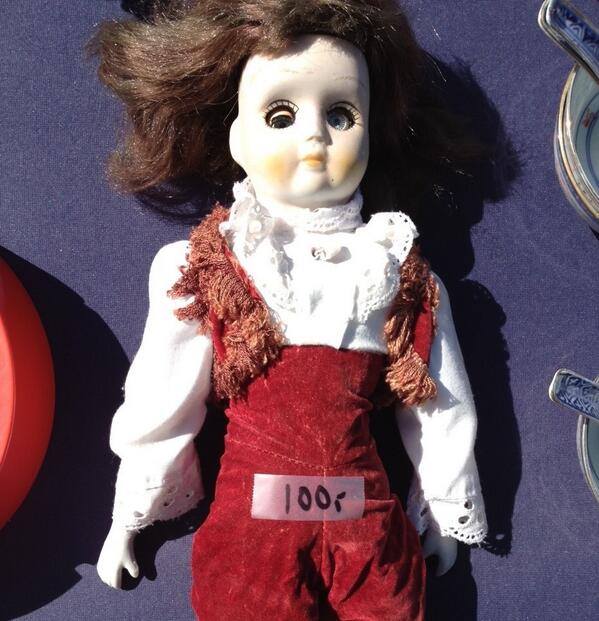 The logo
The “i” in the logo is, of course, DEVICE 6 itself. But it’s also meant to look like an eye or a camera watching you. We replicated this in our IGF booth with an actual  camera lens:

“Awakening”
This is not only a reference to Anna’s physical awakening in this strange room (which in its turn is quite influenced by how Number 6 wakes up in The Prisoner), but also her Awakening to the truth as HAT sees it.

The name “Anna”
At first we were going to call the protagonist “Gwenda” as a reference to the Agatha Christie book “Sleeping Murder“. But we wanted a more common name, and perhaps one that was more common outside English speaking countries too. We wanted the character to be very “clean slate”, so we decided for a familiar name that would let players decide more of Anna’s personality themselves. You’ve probably all known an Anna at some point in your life!

“Mrs Muscat”
Anna rents an apartment from one Mrs Muscat. A reference to the actor Angelo Muscat (who plays the butler in The Prisoner).

2001 Orange poster
This was changed to make the puzzle better, but at first this poster had an astronaut in it, and was a much clearer reference to the movie 2001: A Space Odyssey.

HAT
HAT’s name actually appears very early in the game. It’s quite tiny in the first test before chapter 1, but appears larger in one of the paintings to the left of the “Hope”, “Five” and “Lies” paintings (although with the letter A upside down. What does that mean?). We wanted the organisation to have a nonsensical name that suggested that it might be an abbreviation, and also one that would let us create a fun and recognisable company logo.

During the development we did come up with a very extensive backstory of the organisation and even an explanation for the name, which can be found in this poster, which you’ve already ordered, right?

Kirke Room
The room in which Anna finds the cabinet, is a reference to the character Digory Kirke, from the Chronicles of Narnia books. This is of course because of Anna walking through the closet, just like in the books.

Buttons
A lot of the art in DEVICE 6 is inspired by classic design. The buttons, which is the players’ only way to interact with the black & white pictures, are directly inspired by this cover from graphic designer Sam Suliman: 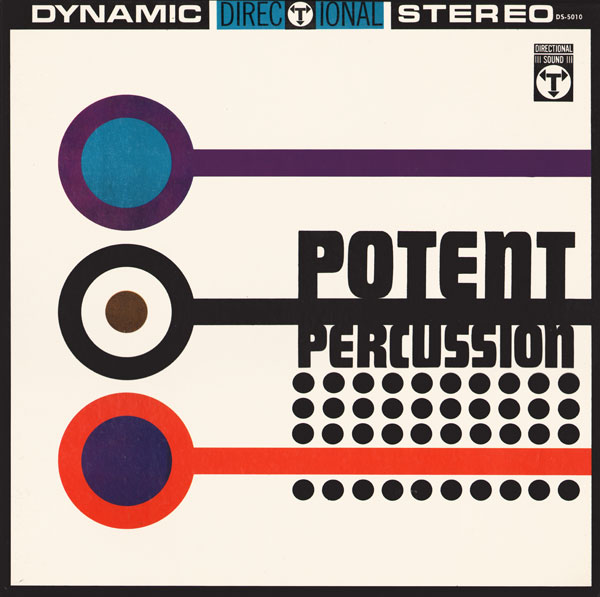 In the same room there’s an odd device in which the player can input a password. That one is actually created from a portable Super 8 editor, bought at a flea market. 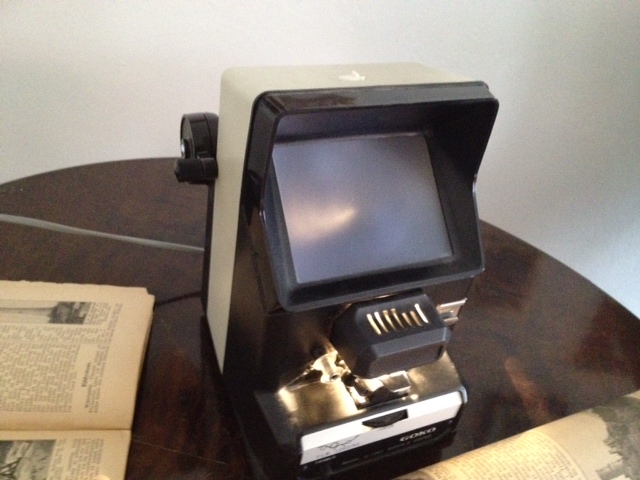 Ground Floor Lobby
Inspired by the lobby of Fairmont Hotel in San Francisco.

Master’s Voice Room
The name of the room where Anna hears reel-to-reel recorder play a pre-recorded message is a reference to the gramophone company His Master’s Voice.

TV Channels
One of the channels displays an image from a bar in Malmö, another channel shows the bar of a small hotel in San Francisco.

“The Story of The Three Bears”
A lot of things in this chapter, including the title, is reference to the classic fairy tale of Goldilocks and The Three Bears.

The bear agents are an odd bunch. Have you noticed that Baby Bear has a clock ticking in the background? You can actually deduce the order in which these were recorded! He mentions in one of the messages that the other bears won’t see him again, and then a loud explosion can be heard.

Did you notice that in one of the messages from Mama Bear, you can hear helpless mumbling, then a silenced gunshot and the reloading of a gun?

Walkürenritt
We thought it’d be funny to use a classical piece somewhere in DEVICE 6, and as a lot of the theme in chapter 2 revolves around war and weapons, what song is more fitting the Wagner’s Ride of The Valkyries? Contrary to what a lot of people think, Daniel did not want it to sound like a videogame version of the track, it’s meant to sound like a early analog synthesizer song.
In the same spirit, the table further into the room is filled with famous military people.

Hatter’s Well
A very subtle reference to the Mad Hatter in Alice in Wonderland.

The Man in The Well
You might enjoy this piece of trivia: the same guy who modelled for the silhouette of the HAT man (and later showing up in the epilogue), is the same guy who voices the somewhat confusing man in the well. 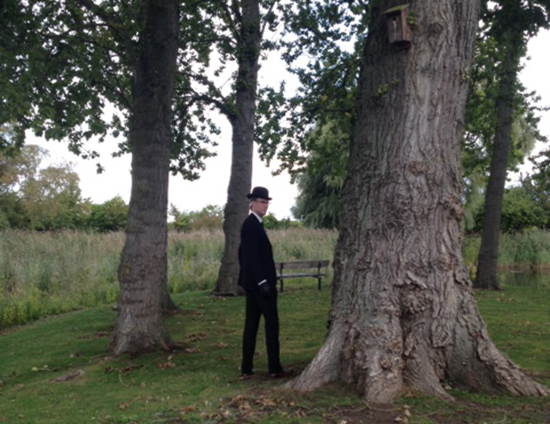 The Priest
The priest is a collage from the very same gramophone that stands in our office. The body is a photograph of Gordon wrapped in toilet paper and the curtains to our server room.

White Chapel/Black Chapel
A reference to the the White and Black Lodge in Twin Peaks (hence the backwards talking!). Did you notice the Alpha and Beta Agents portraits being crossed out with Xs? Another Prisoner reference, from the opening in which a photo of Patrick McGoohans face is X’d out by a typewriter as he resigns.

Glory Road
After the cemetary, Anna walks along something called Glory Road. It’s named after the Neil Diamond song of the same name.

Fool Hill
A very subtle reference to the Beatles song “The Fool On The Hill”.

The Lighthouse
The Lighthouse is not a direct reference to anything specific, but it’s not far fetched to think that we had the lighthouse of the Shutter Island by Dennis Lehane in our minds when coming up with it.

Club Rasoir
The name of the underground club is inspired by a bar/bistro in Malmö called Café le fil du Rasoir (we changed this in the last minute, it was originally called The Opium Erotica).

Theatre Posters
The posters found in the corridor (after Anna leaves the elevator) has intentionally bad and sometimes misspelled French. They are references to different things. From right to left;

“Un Animal Terrible“, was inspired by a sentence by Simon and Jonas’ teacher on a school trip. A fly in his glass of wine caused him to call the waiter and speak these legendary words.

“Les Cigarettes Perdus”, this is a reference to a very important mystery in the game. We won’t spoil it.

“Année de Marchee” is a reference to Year Walk. Visually it’s a play on this classic Vanity Fair cover. 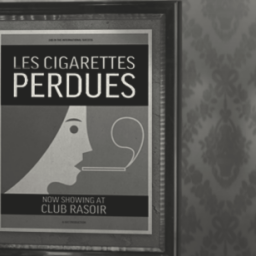 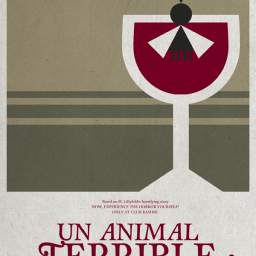 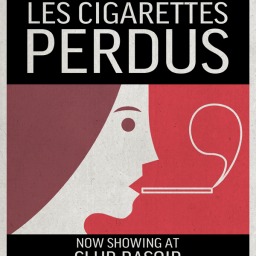 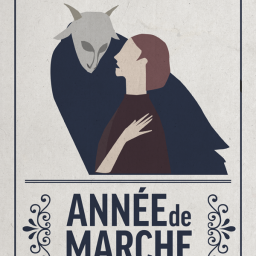 Ticket Booth Monkey
This monkey is built from two different monkeys. One is the classic Kaj Bojeson monkey, the other one we found in the basement of a fantastic flower shop just a few meters from our office.
The ticket accepting monkey on the way to the stage is another monkey we found at the flower shop.

The Bar
The Club Rasoir bar is a photo from a hotel bar here in Malmö. Have you noticed one of the taps reads “Ape Lager”?

Jonathan Eng’s “Anna”
This is one of the strangest things in the game. You know that Jonathan Eng is a real person, right? We just loved the thought of putting a friend of ours within the game.
There’s a text that roll lyrics and instructions while Jonathan sings. At one time it mentions “mashed potatoes”, which is a reference to the dance by the same name.

HAT’s Hideout/The Pier
This one is a mix of a pier in Malmö (which has quite a lovely little café, by the way), some kind of silo and the TV Tower in Berlin.

Human Screams?
When trying to operate D6, it sounds a bit like someone screaming, right? It’s actually not screams. It’s the song that plays during the sheep encounter in chapter 4, sped up then down-pitched.

Mandatory System Reboot File
After shutting down, the system restarts and the player is granted with what appears to be a manifest or user agreement document of sorts. This is inspired by loads of documents, contracts and books, but mentioning any of them would probably get us in trouble.

“Hello, Goodbye”
Another Beatles reference. (and this sort of becomes a meta-reference, as a Beatles song appears prominently in the final episode of The Prisoner)

The pier and the HAT man
These are actually largely unedited pictures from a photo session at the beach here in Malmö. Check out the original, totally unedited, photo.

As for the ending and in interpretations of the game, we’ll leave that up to you.

Hope you enjoyed this!