Here we go:
DEVICE 6 is our next “game”.
We are making it together with the lovely people that we made Year Walk. That means Jonas Tarestad is writing the story, Daniel Olsén is making the music (that you can hear in the trailer) and Jonathan Eng is returning with a very special song.

Head over to the game’s minisite to get the full scoop and more pics:
www.device6.com

Confused?
Sit back, relax, and we’ll try to make things clear.
First, read this, the Official Description™ for DEVICE 6:

A surreal thriller in which the written word is your map, as well as your narrator.

DEVICE 6 plays with the conventions of games and literature, entwines story with geography and blends puzzle and novella, to draw players into an intriguing mystery of technology and neuroscience.

Anna wakes up in a castle on a remote island, with little recollection of how she got there. All she remembers is an unusually unpleasant doll…

Why are there two identical castles on the island? Who is the mysterious man in the bowler hat? And above all, what is the purpose of the tests Anna is put through? 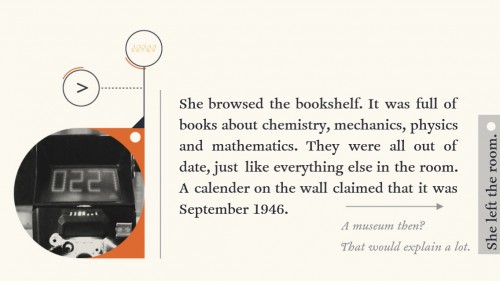 Still confused? Ok, one more time, in a not so corporate kind of way!
Everything, design decisions, interactions, art and what have you, in DEVICE 6 is part of the story, so we’ll try to not spoil it for you.

Almost immediately after having released Year Walk, we sat down and talked about where we wanted to go next. One of the things we liked best about Year Walk was its companion app. We were interested in exploring text based games more; but on the other hand we knew that we weren’t interested in doing a classic text adventure. One of the things we like the most is still making interactions that just feels really good.

During Year Walk, you might remember that we talked a lot about drawing your own maps. Because Year Walk didn’t have a map, we were, quite ironically, developing a fascination for maps. We came to the conclusion that making a game based around maps and text, and spiced with riddles, story and descriptive sound would probably make a very cool, minimalistic, descriptive, experience.

So what we ended up with was this thing called DEVICE 6, which is very much its own thing. It has very strong gaming elements, but it has just as strong elements of a book or a classic riddle. Sound is important, too. When you are playing, you can hear everything that is happening in the game. Footsteps, doors opening, noisy old fans and machines, recorded messages on old tape recorders.

But, as you’ve seen it’s not all text! We came up with this concept that we internally called “visions”, which almost looks like small windows in which you can peek into another reality. We think three dimensional effect they create is quite awesome!

We are following up some of the interaction ideas from our previous games, you’ll swipe to “move” around in the text, and you will be able to manipulate some of the mentioned “visions”, to solve puzzles.

We have surprises and secrets that we want to keep to ourselves for now, but to round it all of, we’ll just drop some things that have been inspirational to this game:
Franz Kafka, Agatha Christie, David Cronenberg (mostly Scanners), spy and agent-themed movies from the 60s, The Prisoner, videogames like Professor Layton, 999 and Zelda, and just technology (both old and new) in general.

We are making DEVICE 6 with a lot of passion, and we are aiming at releasing it this year. That is about all for know (we think!). 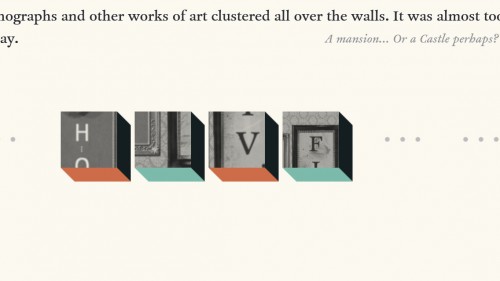 If the HAT doesn’t fit your head, we’ll adjust it for you™