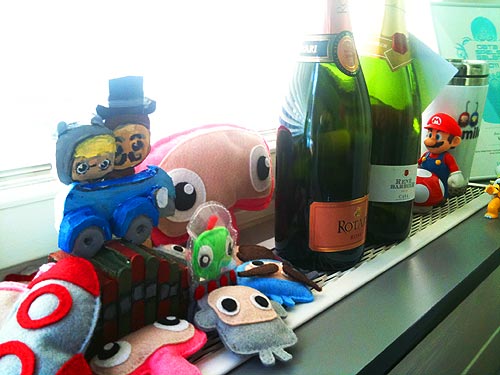 We made it through launch alive! The response to Bumpy Road have been phenomenal, and we’re very happy about how everything has turned out.

So, what’s next?
Now we’re picking up the pieces. Doing various administrative things, but most important of all – we’re almost done with the first update for Bumpy Road! We want to keep the content a surprise until it’s out (which should be very soon!), but we can say this about it:
– It’s got over 100 new level segments!
– It’s got a new gizmo.
– There’s going to be a few new Game Center things.

This update (as well as future ones) are going to be self contained. We don’t want to tamper with the original material (unless it’s bug fixes), as we think what’s in the game should be kept that way and serves some kind of historical value.

What’s next?
– We have one more Bumpy Road iOS update that we really really (Reeeaaally) want to do pretty soon – We’re still deciding a few things on it (release timing). Anyhow – It’s an update that’s going to be very cool.
– As you know, a Mac version of Bumpy Road is planned. Work on that will start pretty soon – No dates yet, but we’ll keep you posted.
– Prototype of GAME 3!
– VACATION!
– Work on GAME 3.
– Maybe change all of these plans and do something completely else (We call this The Simogo Shuffle, which is also a dance we do, we should show it to you sometime).

To round this off, here’s a few reviews and stuff about Bumpy Road:

Insert Credit – The One Game You Need to Get This Week

Indie interview with Game of the weeks (Bumpy Road and Casey’s Contraptions) on Applicationiphone.com (in French)

I think that’s it. If we missed a link, let us know!

5 thoughts on “What’s going on”