In all this Beat Sneak Bandit madness it’s easy to forget that when we announced Bumpy Road in 2011, we mentioned a Mac version. Whatever happened to that? Well, a lot of stuff happened that made us down prioritize that version, but now it’s in the making again.

We won’t make any promises yet as to when it will come out, it’s hard to juggle all of our projects being only two persons. We do a quite a bit of more stuff than you see – tiny bit of contract work, administrative stuff, prototyping, idea scribbling and bar fighting. 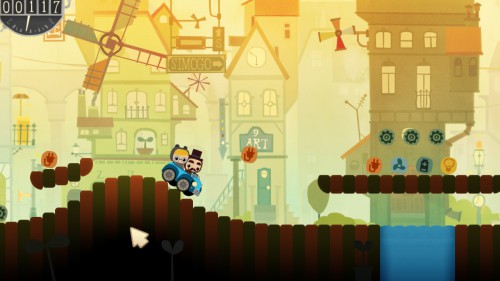 It’s controlled with a mouse and it works brilliantly (in fact, all levels in the iOS version are developed, played and tested with a mouse before tested on touch devices) – and you’ll be able to choose a range of different cursors! We have another control scheme planned as well, but we have to test it out thoroughly before making a decision if it stays or not. If it works it will be a pretty novel and fun thing!